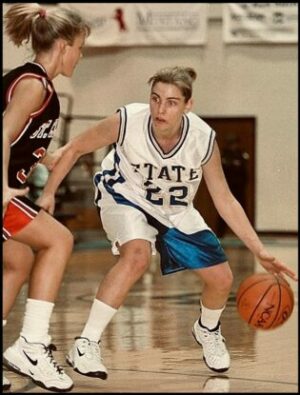 Fourteen former players who had exceptional careers in the state will be inducted into the South Dakota High School Basketball Hall of Fame as members of the Class of 2022.

Standouts from seven different decades are represented. The graduation years of the inductees range from 1947 to 2004. The 12th annual induction banquet will be held on the afternoon of Aug. 27 at the Ramkota Hotel located in northwest Sioux Falls. Ticket information will be announced soon on this website.

Six members of the Class of 2022 helped their team win a state championship. One of those, Sherri Brende (at right in submitted photo), was part of two state titles, leading Baltic to Class B girls championships during both the 1995 and 1996 seasons.

During the banquet the Brookings girls team of 1985 will be honored by the Hall of Fame as a Team of Excellence. Jim Holwerda coached the Bobcats, who were ranked No. 3 nationally by USA Today. He was recognized by USA Today as the National Coach of the Year. Brookings was the Class AA champion and achieved a 23-0 record to extend its unbeaten streak to 48 games.

LISA (KANNEGIETER) BAHE, Brookings (Willow Lake 1990): Bahe was Miss Basketball and Gatorade Player of the Year in South Dakota as a senior at Willow Lake when she averaged 19.5 points and 10 rebounds per game. She had 1,303 career points for the Pirates. Bahe was an all-North Central Conference player at South Dakota State with 1,130 points.

JEFF BOOHER, Lincoln, Neb. (Brookings 1988): Brookings was 53-15 in Booher’s three seasons and won the Class AA state title in 1987. The Bobcats finished second in 1986 and third in 1988. Booher was Naismith Player of the Year in South Dakota as a senior. He had 1,018 career points at South Dakota State and was chosen to the all-NCC team.

SHERRI BRENDE, Iowa City, Iowa (Baltic 1997): Miss Basketball and USA Today Player of the Year in South Dakota as a senior, Brende led Baltic to Class B state titles in 1995 and 1996 while scoring 1,886 career points. The Bulldogs were 24-1 during each of those seasons. Brende was all-NCC three years and totaled 1,444 points at South Dakota State.

BERNARD DUFFY (Fort Pierre 1947): The late Duffy led Fort Pierre to a three-year record of 64-7. The Buffaloes had never won a district championship until Duffy paced them to District 16 titles in 1946 and 1947. He was among the state’s earliest practitioners of the one-handed jump shot and was an outstanding player at Sioux Falls College.

DELBERT GILLAM (Argonne 1953): The late Gillam was an explosive scorer who averaged 25.9 points per game during his senior season at Argonne. He made South Dakota high school basketball history when he set the state single-game scoring record of 72 points during a game against Canova which was played in Argonne on Feb. 10, 1953.

GORDIE GROOS, Sisseton (Sisseton 1966): An outstanding two-sport athlete, Groos averaged 20 points and 17 rebounds per game during his senior season at Sisseton. While at Northern State he was a four-year starter in basketball with 1,002 career points. In football Groos was an NAIA All-American defensive tackle for the Wolves.

LAURIE (BRUNS) KRUSE, Lennox (Lennox 1987): At the time of her graduation Kruse held Lennox career records of 1,073 points and 633 rebounds. She shot 54 percent from the field for her career. Kruse scored 1,370 points at South Dakota State. She led the NCC in scoring with 23.5 points per game in 1991 and was chosen league MVP.

MATT MARTIN, Sioux Falls (Spearfish 2004): Martin was all-state three years and led Spearfish to a 23-1 record and Class AA state title in 2002. He had 1,602 career points and was Gatorade Player of the Year in South Dakota in 2004. Martin was a four-year starter at the University of Montana where he totaled 1,021 points and 312 assists.

CLYDE OLSEN, Plankinton (Plankinton 1956): Plankinton finished fourth in the Class B state tourney in 1956 as Olsen netted 84 points, including 29 in the quarterfinals and a record 40 in the semifinals. He shot 90 percent on free throws that season, at one stage making 33 in a row without a miss, and ended his career with 1,335 points.

TOM ROPS, Luverne, Minn. (Lennox 1992): Rops and the Orioles won the Class A state title in 1991 and finished with an unbeaten record of 24-0. Custer topped Lennox in the title game in 1992 despite 30 points from Rops. That season the Orioles were 22-2. Rops was an all-NCC player at South Dakota State and totaled 1,147 points.

MILTON SORENSON (Wakonda 1953): The late Sorenson joined the Wakonda varsity as an eighth-grader. He went on to score 2,480 points for the Warriors and still ranks among the state’s all-time career scoring leaders. After graduation Sorenson served in the U.S. Army and then he returned to South Dakota to play collegiately at Southern State.

WAYNE THUE, Hayti (Hayti 1960): Thue led Hayti to a No. 1 ranking in the Class B poll and a 28-2 record in 1960. The Redbirds were a combined 47-6 in his final two seasons. Known as an outstanding defensive player, Thue was chosen all-South Dakota Intercollegiate Conference three times and scored 1,404 career points at Dakota Wesleyan.

DAWN (HULL) ZAHN, Sioux Falls (Sisseton 1992): A 1,267-point career scorer, Zahn led Sisseton to the Class A state championship in 1990. That season Sisseton compiled a 23-2 record. Zahn averaged 22 points per game as both a junior and senior. She earned all-NCC honors while at South Dakota State where she totaled 1,125 points.

HARLEY ZEPHIER JR., Dupree (Aberdeen Roncalli 1975): Zephier made his third appearance on an all-state team in 1975 when Aberdeen Roncalli won the Class A state championship and finished with a 23-2 record. He averaged double figures in scoring during each of his four seasons, including 28 points per game as a junior at Northwestern.