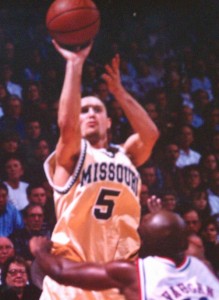 Whether leading Watertown to a Class AA state title or helping the University of Missouri to a Big 8 Conference championship, Jason demonstrated a tenacity that earned him a reputation as a fierce competitor.

The Arrows defeated Sioux Falls O’Gorman 53-36 in the finals of the state tournament in 1992 when Jason was an all-state junior.

As a senior he scored 29.5 points a game and Watertown got back to the Class AA finals. This time the Arrows came up short against Huron 76-65. Jason, a 6-foot-1 guard, was again all-state. He finished his Watertown career with 1,899 points.

Jason played for Kraig Ulveling and was named the state’s Mr. Basketball in 1993. In addition he was an all-state football player and set a high jump record by clearing 7-1 at the state meet. In recognition of his wide-ranging exploits he was named South Dakota High School Boys Athlete of the Year. Jason was heavily recruited before signing with Norm Stewart.

Missouri raced to a 28-4 record during Jason’s freshman season in 1994. The Tigers were undefeated at 14-0 in the Big 8. During his four seasons Missouri went 82-45.
Jason, whose dad Jim was a coach, started 80 of the 125 games he played for Missouri. He scored 1,194 points and is second in Tiger history in career free throw accuracy at 85 percent. He is also sixth in 3-point field goals made, having connected on 190 of 469 for 41 percent.

Jason lives in Columbia, Mo. He and his wife Jennifer have one child: Sydney. The South Dakota High School Basketball Hall of Fame is proud to induct Jason as a member of its Class of 2012.