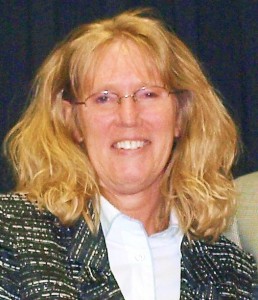 When Title IX was fully implemented in 1975 girls basketball in South Dakota took an advantageous turn for the state’s high school girls. One of those girls, among many, was Wendy Swanhorst from Cresbard.

For those first years the girls regular season schedule and tournament were played in the fall of the year, and the ball was the same size as used by the boys. In 1975, the first year of Title IX implementation, Wendy started as a sophomore for Cresbard High School and was an All-State Honorable Mention. Wendy was prep player of the week chosen by KSDN radio in Aberdeen and also made all conference first team averaging over 15 points per game. Later in her career she went on to be first team all-state in both her junior and senior years.

As a junior, in 1976, she led Cresbard to the State “B” Tournament with a 30 point effort against Ipswich in the regional final. In the state tournament’s first round game versus Jefferson she scored all of Cresbard field goals (11) and had a total of 27 of the teams 30 points. Cresbard ended up the Consolation Champions.

Wendy was all-tourney and set the record for most points at 67 in the second year of the official state tournament for girls. For the year Wendy averaged 21 points and 17 rebounds per game. She shot 40% from the field. The team record was 23-3.

As a senior, she upped her scoring to 24 points per game and 12 rebounds while shooting 43% from the field. On two separate occasions she scored 38 points in a game.

Undefeated for the entire regular season, the Comets were upset in the regional finals by Ipswich. Wendy was first team all-state, and the team’s record was 22-1. That Spring she won the state shot put championship for the Cresbard girls track team.

Wendy’s playing days continued at Northern State University where the Wolves placed 3rd at the first NAIA national tournament for women in the Spring of 1981. Also on that team was 2013 HOF inductee Carol Freeman.

Wendy learned much of her basketball playing on the gravel court with her Dad and brother, Curt, on the family farm. Her Dad, John, would mostly get the rebounds and Curt and a schoolmate tried to stop Wendy from scoring. Needless to say, when Dad and Wendy won it sometimes got a little difficult and rough both physically and mentally.

Wendy’s family includes her parents, Donna and John Swanhorst of Aberdeen, her older brother Curtis, and younger sister Jann. Today Wendy is a CPA and heads her own auditing company, Swanhorst and Company LLC, in the Denver area.