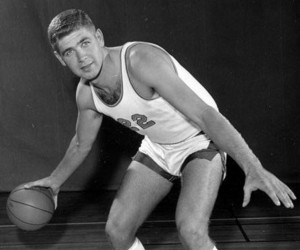 Salem St. Mary’s ‘Falcons’ – 1956
Terry was the starting center for the the Falcons of Salem St. Mary’s High School. In the 1950s the Parochial schools were not allowed to play in tournaments with public schools. The Catholic High Schools had there own state tournament. There first state basketball tournament was held in Mitchell in the mid 1930s. There were twelve Catholic Schools in South Dakota that had basketball teams in the mid 1950s. They were Sioux Falls Cathedral, Dell Rapids St Mary’s, Salem St Mary’s, Howard St Agatha, Mitchell Notre Dame, Sturgis St Martins, Rapid City Cathedral and four Indian Misson Schools. They were Marty, Stephan, St .Francis and Holy Rosary.

Terry was the center for  the freshmen team in 1951-52, He would start on the B team and later suit up for the varsity game. Within six weeks Terry was moved up to the varsity were he became a starter. He would start every game that He played in for the rest of his career. That was a total of 89 games. He would score 23 points per game and ended his career with 2074 points. He was not only a great re-bounder but was aggressive around the basket. Eventually at 6-6 he was a power to be reckoned with in every game.

Terry played in every varsity game for four years.As a sophomore Terry and his teammates lost to Sioux Falls Cathedral in the semifinals and placed third. In that tournament Terry scored a record high 42 points in one game and a total of 124 points in four games. These records have never been broken. As a senior Terry averaged just over 30 points a game with a high of 56 points in one game,He helped the team finish second in the tournament, losing to St Agatha of Howard in the finals. The Catholic tournaments ended in the mid 1960s. Terry is the first player to be selected from the Parochial Schools which are an integral part of South Dakota Basketball History.