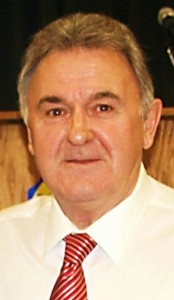 As the 3rd youngest of 9 brothers and 1 sister, Jim Schlekeway came by his love of athletics naturally. Growing up on the farm of parents Ray and Celia Schlekeway near Lake City, South Dakota, Jim and his siblings spent countless hours entertaining themselves by shooting buckets in the hoop attached to the barn, or by tossing “basketballs” they had created out of the packed, curried hair of the cows into tin can hoops mounted on the stanchions. Jim credits his older, taller brothers for his rebounding ability. “I had to be an aggressive rebounder, or I would never get to touch the ball. I loved to shoot, and you can’t shoot if you don’t have the ball!”

Jim’s reputation as a scorer started early with his elementary career at Lake City Grade School. His 5th grade year during a game against Veblen, Jim scored 49 of his team’s 51 points. Continuing in the Schlekeway tradition, Jim attended Britton High School from 1960-1964 where he played for brother Gene Schlekeway and Coach Bill Amacher, starting on the varsity all four years. Jim averaged 20 points a game for all four years and ended with 1900 high school career points. Other honors include: 1st Team All-State 1962, 1963, and 1964; 1st Team All-Tourney Class B Tournament 1962; Prep All-American District 5- 4th Team 1964; and the top scorer and top rebounder in the Northeast Conference in 1964. Jim earned 12 letters in high school and was a 1st Team All-State Football Player his senior year and a state place winner in shot put. While at Northern State College from 1964-1968, Jim earned 10 letters and garnered countless honors. His 1864 career points were the second highest in Northern history to that time (before the 3 pointer) and currently ranks 7th highest.