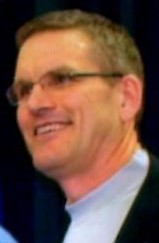 Alan Miller grew up in Stickney. He had 10 brothers and sisters in his family. Alan was born in 1963 and graduated from high school in 1981.

During that time, basketball was a very prominent sport in the family. It was during that period of time, Alan would enjoy going to the Stickney games to watch his brothers play. In fact, the talk of the town was about basketball, the Big B tournament, and who would be in the tournament.

Just a few years later, Alan found himself right in the midst of the talk and the games. His brothers had set a good example and the Raiders had established a winning tradition under Coach Dan Moran. It appeared the basketball fever had been passed down to Alan.

Being influenced by his brothers and by the Raider tradition, Alan’s goal was to be the best basketball player in the family. Alan would spend countless hours in the gym and on the driveway. Even though Alan had a strong desire, success would not come easily. Alan did not begin to grow until late in his sophomore year. He was considered a “late bloomer.” In fact, his dad told him that he may not be like his older brothers Tom and Chris who received all-state honors in high school and were star players at Dakota Wesleyan University.

Finally in his junior year, Alan began to grow into his physical body and was playing for the Raiders. That year the Stickney team made it to the Big B and placed third. Alan received all-tournament honors and was named third team all-state. But this was just the beginning.

In 1981, Alan had grown to 6-foot-4 and was playing the center position. He had developed great dribbling skills and could bring the ball down court if needed. He had a very nice jump shot and became a team leader. In 1981, the Raiders would win the State B. That year, Alan was chosen to the all-tournament team, first team all-state and Mr. Basketball of South Dakota.

Alan would go on to be a special player at Dakota Wesleyan under Coach Gordon Fosness. Thus, Alan, like his brothers, have allowed the Miller name to become a basketball tradition in South Dakota.