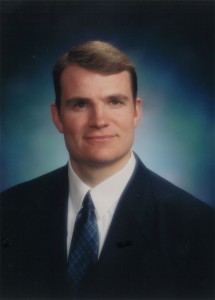 Eric became a city treasure of Aberdeen as he starred for the Golden Eagles and then later for the Wolves of Northern State University.

One of the most decorated players in state basketball history, Eric scored 2,025 points at Central to rank among South Dakota career leaders in high school. And his 3,062 collegiate points is an all-time state record.

Eric played in the State Class AA Tournament four consecutive years. The Golden Eagles claimed the championship during his freshman season when they outlasted Mitchell 54-47 in the finals. Central then finished second in 1989, fourth in 1990 and third in 1991.

A prolific 3-point shooter with accuracy and range, Eric was chosen to the all-state team three years as a guard for Terry Small. His single-game high for the Golden Eagles was 59 points. Eric was named the state’s Mr. Basketball in 1991.

After starting his collegiate career by spending one season at Augustana College, the 6-foot-1 Eric transferred to play his final three years for his hometown Wolves and Bob Olson. What a three years it was as Northern reeled off consecutive records of 34-2, 25-9 and 29-5. The Wolves finished as runner-up in the NAIA National Tournament in both 1993 during Eric’s sophomore season and in 1994 when he was a junior.

Eric was chosen to the all-Northern Sun Intercollegiate Conference team all three seasons. During each of those seasons he was also voted most valuable player in the NSIC. He averaged 26.3 points per game during his career as a Wolve and hit 456 of 1,089 on 3-point field goals for 42 percent. Eric was named South Dakota High School Boys Athlete of the Year in 1991 and earned a rare dual honor when he was named South Dakota College Male Athlete of the Year in 1995.

Eric lives in Aberdeen. He and his wife Kami have three children: Adam, Hope and Lydia. The South Dakota High School Basketball Hall of Fame is proud to induct Eric as a member of its Class of 2012.