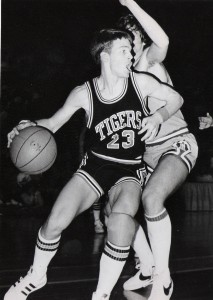 Rod Merriam grew up in Huron, SD. He was born on March 3, 1962. That March was one of the stormiest months on record in South Dakota and it was about the same time sectional and regional basketball tournaments were winding down. What a great time to be born in South Dakota. Rod came into this world during a stormy month and it didn’t take long for Rod “The Rocket” Merriam to create his own storm on the Basketball Court in Huron Jr. and Sr. High Schools. I know his dad who grew up in the Carthage/Howard area. I think the Rocket took off after his dad. Rod was South Dakota Mr. Basketball in 1980. He was an All-State Player and leading scorer in the ESD in 1979-1980. Rod was a tremendous shooter from out and a real scrapper for the Huron Tigers. He just had a love for the game of Basketball. Rod didn’t mind getting his hands cold when shooting outside in the cold winter months. In fact you might have found his gloves laying by one of the baskets in Huron after he ran home for supper. Rod Merriam will be inducted into the South Dakota High School Basketball Hall of Fame because he had the discipline, desire and the dedication to play basketball. Congratulations to Rod the Rocket Merriam!!! Rod Merriam will be inducted into the South Dakota High School Basketball Hall of Fame on 27 March 2010.