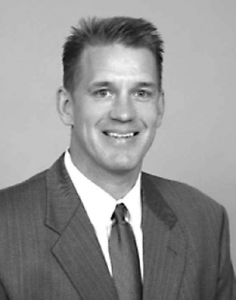 When Luther Hippe entered Washington High School in 1980 he had already achieved honors in football and awards in baseball. As a youngster his accomplishments included local and regional recognition in the national punt, pass and kick competition and the Most Valuable Player award in Teener baseball. When

Luther left WHS in 1983, however, his credentials were solidly based on basketball achievement. He graduated high school having attained numerous individual honors and having contributed to outstanding team success on the hard-court. Hippe participated in football and basketball. He was named the Most Valuable Player for the 1980-81 Warrior sophomore cage team.

As a junior, Luther participated in football and basketball and earned varsity monogram letters in both sports. In the Warrior basketball program, the rangy southpaw earned his first start at center early during his junior year and maintained his starting spot the remainder of his high school playing days. He was a leading rebounder on the 1981-82 basketball team and received honorable mention on the Sioux Interstate All-Conference Basketball Team.

As a senior, Hippe helped lead the 1982-83 Washington High School boys basketball team to a perfect 23-0 season as the Warriors (at that time) became only the fifth team in the history of South Dakota Class ‘A’ basketball to complete an undefeated season. During the regular season he led the Warriors in rebounds (11 per game), steals, free throw percentage (75%), and total points scored (17.44 per game). For the entire year, including section and state tournaments, Luther shot 60% or better from the field. From the floor he was 16-24 for 66.67% during the section tournament and shot 24-41 for 58.54% during the state tournament. In the pressure-packed post-season tournaments, Hippe had a combined field goal percentage of over 61%. He scored double figures in 21 of 23 games during his senior year.

Luther saved his best effort for the end of the season. In the most pressure-punctuated moment of his outstanding high school hoop career, he was at his best. In the opening game of the 1983 Class ‘A’ Boys Basketball Tournament in Rapid City, Hippe led the Warriors with 25 points and 12 rebounds, playing a little over half the game as WHS defeated Watertown, 69-48. In the semi-final game he led WHS with 14 points and 9 rebounds in a 59-52 win over Mitchell. In the final game against defending champion Pierre, Luther emerged as a dominant force in a championship game described by many as one of the finest played in state history. He led the team with 20 points and 10 rebounds as the Warriors defeated Pierre 59-56 to become state champions. It was Washington’s first state basketball championship since 1971.

Luther attended Sioux Falls College from 1984-88 where he played four years of varsity basketball, amassing 1,589 points and 912 rebounds while being named to the SDIC all-conference team 3 times. He served two years as team captain and also played two years of varsity baseball. He earned an undergraduate degree in Mass Communications in 1987 and a Master’s degree in Sports Management from Minnesota State-Mankato in 1994. Hippe currently lives in Chanhassen, Minnesota with his wife and three children. He continues his passion for sports as the Director of Operations/Team Travel with the Minnesota Vikings.