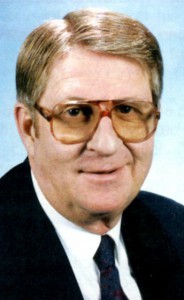 Gordon Fosness is a native of Presho. He is a 1953 graduate of Presho High School. Gordie played both football and basketball for the Wolves.

Gordie led the state in scoring his senior year with a 32-point average and finished his Presho career with 1,442 points. He was a starter midway through his sophomore year. That year Kadoka defeated the Wolves in OT at the region tournament. That would be the closest Presho would come to entering the Class B state tournament. In his junior and senior seasons the Wolves never got out of the district tournament, being beaten by White River  and Murdo, respectively.

Presho was still an outstanding team. In Gordie’s senior year he had four consecutive games where he scored 40 or more points. He was a deadly shooter  and very aggressive around the basket. One of those games was at the Corn Palace in Mitchell.  This led to some heavy recruiting by Dakota Wesleyan University.

The rest of the story is history at DWU. There were no all-state teams in basketball during the early 1950s. However, Gordie was selected to the all-state 6-man football squad. After some great years at DWU in both football and basketball, Gordie was drafted in the 10th round by the Minneapolis Lakers. George Mikan was the Lakers coach that year. Gordie and Jim Sutton of Onida and South Dakota State were cut from the team just prior to the start of the NBA season.

After returning to South Dakota, Gordie coached at Cavour. The next year he moved to Gregory, where he coached for three years. In 1961 he became the coach at Wesleyan were he stayed for 22 seasons and had a 351-195 career record. Gordie was the one of the best players in South Dakota history. He was called the “basketball wizard” of western South Dakota in the 1950s. This may be one reason he was such a successful coach and mentor during his coaching career.