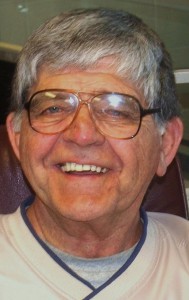 Roger Nelson was a 1954 graduate of Brookings High School. In 1945 the Nelson family would move from the farm near Arlington, South Dakota to Brookings, South Dakota. Roger started shooting baskets on the farm and really enjoyed all sports. He would soon meet some friends in Brookings that had the desire to play basketball and football. This launched Roger into a sports haven, more or less. The basketball fever seem to hit him the hardest in the 1950s. Basketball was the rage of the state at that time. Roger would soon become one of the best basketball playersin Bobcat History. Roger will still tell you today that it was a team sport and he had good players with him on the team that won the 1952 State A Tourney. Roger was a 4 year letter winner in basketball and football.

In the 1950-51 basketball season Roger would start six games, that year the Bobcats would win the ESD and place Third in the State A Tournament. In the 1951-52 basketball season the Bobcats would win the ESD, the State A Tourney. The only loss was a triple OT loss to the Watertown Arrows.  In the 1952-53 season Roger would start at either the guard position or the forward position. The Bobcats placed second in the ESD and 5th in the State A Tourney. That year Roger was the leading scorer on the team and ended up 5th in the ESD scoring race.He was also named to the All-State Team. In the 1953-54 season the Bobcats would win the ESD Conference. Roger was a starter at the guard position, Captain of the team, and All-Stater again that year. He scored 37 points in a game against Mitchell and finished his career with 1027 points. He is still one of the leading scorers in Brookings Bobcat Basketball. Roger was an excellent passer with a great touch on his shot and had as many moves as a belly dancer. For his size he could handle any position on the court effectively. He had a great basketball sense and seemed to be in the right place at the right time. He would go on to play as a starter at the University of South Dakota with the same results. Roger was a winner  whether playing or coaching. His teaching and coaching career has touched many people and to this day Roger still plays basketball weekly. Roger has been inducted into many types of Halls of Fame. But this honor was bestowed upon him by his peers and only his peers and this after 60 years. Congratulations Roger you deserve to be inducted into the South Dakota High School Basketball Hall of Fame. See you on March 26,2011 at the Dakota Prairie Playhouse on the DSU Campus in Madison, South Dakota.