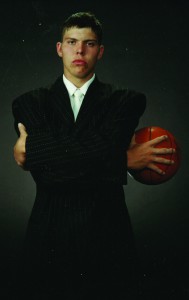 From the Corn Palace to an NBA championship ring, Mike has valiantly carried the banner of South Dakota basketball to a level of distinction never before attained. Mike helped the Kernels of Gary Munsen win two Class AA state titles and became the most heavily recruited athlete in South Dakota history. His next stop was the University of Florida where he led the Gators to the NCAA Final Four in 2000. Now in his 12th NBA season, and a career 10,000-point scorer, Mike is a former Rookie of the Year and Sixth Man of the Year.

Last season the 6-foot-8 guard/forward became an NBA champion when his seven 3-pointers and 23 points sparked the Miami Heat past Oklahoma City 121-106 in the deciding game of the NBA Finals.

Mike was first team all-state three years for Mitchell. He set Kernel records with 54 points in a game and 1,724 in his career. During his two years playing for Billy Donovan at Florida, he led the Gators in scoring both seasons with averages of 12.2 as a freshman and 14.1 as a sophomore. Mike earned all-Southeastern Conference honors in 2000 when Florida fell to Michigan State 89-76 in the national championship game. Orlando selected Mike with the fifth overall pick in the 2000 draft. Since starting his career with the Magic, he also played for Memphis, Minnesota and Washington before signing with the Heat in 2010.

Basketball excellence is a trademark of Mike’s family. His father Tom and his uncles Chris Miller and Alan Miller were all standouts at Dakota Wesleyan University. His brother Ryan, now associate head coach at Auburn, starred at Northern State. His other brother, Jared, played at both Northern and Southwest State. And two cousins played college basketball this season, Jordan Miller at Southwest and Jade Miller at Wesleyan. Mike and his wife Jennifer live with their children Mason, Mavrick and Jaelyn in Pompano Beach, Fla. The South Dakota High School Basketball Hall of Fame is proud to induct Mike as a member of its Class of 2013.