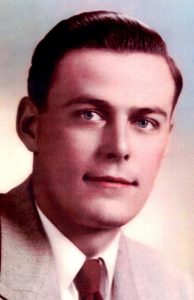 The two stages of Dick Baun’s brilliant basketball career were separated by a tour of duty in the U.S. Navy. Mobridge High School was coached by G.W. Wright and was the kingpin of Class B during the World War II years, winning state championships in 1943 and 1944. Baun was a 6-foot-3 center who was the driving force behind the back-to-back titles earned by the Tigers. He was named the tournament’s Most Outstanding Player as both a junior and senior during an era when no all-state team was selected in South Dakota.
Mobridge defeated Oglala and then Britton to open the 1943 tourney. Low-scoring games were the norm at that time so Baun made an impression when he netted 22 points against Oglala. The Tigers topped Dell Rapids 27-26 in the finals. A year later Mobridge beat Agar and Tripp, then in the championship game downed Madison 29-26. Baun again was the tournament’s offensive star when he scored a three-game total of 45 points.
Immediately after graduation Baun enlisted in the Navy. After his training was completed he served aboard ship in the Pacific Theater during the final stages of the war. He was involved in radar operation, communications and navigation. Among his responsibilities was driving a beach landing craft during combat missions. After the war Baun returned to South Dakota and enrolled at Yankton College to pursue a degree and resume his athletic career. The Greyhounds were members of what was then the Dakota-Iowa Conference. Among the notable games played by Baun during his time as a Yankton College stalwart was against the renowned Harlem Globetrotters. It occurred in the 1949 season after the Greyhounds had just opened their new Nash Gym on campus.
Back then the Globetrotters played serious basketball and were highly competitive. They toured the country and faced many of the top collegiate teams of the day. Yankton College held a lead during much of the game before the Globetrotters rallied to secure a 51-48 victory. Baun paced the Greyhounds with 16 points. Baun also played football with distinction at Yankton College, as he had done earlier at Mobridge.
He taught and coached at schools in Andover, Ipswich and Aberdeen before moving to Idaho in 1956. He coached basketball and football at Twin Falls High School and then became dean of students. Later the Twin Falls gym was named Baun Gymnasium in his honor. Baun appreciated the outdoors and found great enjoyment in the time he spent in the Sawtooth Mountain Range of Idaho. After his retirement he was active in ranching until his death in 1999. Baun had been married to Mary Looney. Children are Dale, Linda, Alan and Robin.