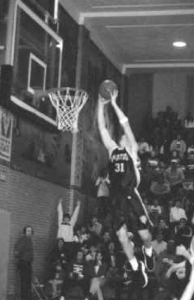 Denver TenBroek was born in Bismarck, ND to Molly and David TenBroek. He was the youngest of 3 brothers (Trampas and Jeremy). Denver grew up on a ranch near the North and South Dakota border, and learned most of his work ethic from watching and learning from his parents. Denver played for McIntosh High School and helped take the team to 4 consecutive state tournaments starting in 1996. They finished 8th, 5th, 1st, and 2nd respectively. Denver got the rare chance to compete alongside both his brothers in 1996, then only with Jeremy in 97’ and 98’. McIntosh had a dedicated group of players as well as two great coaches during those years.

Denver finished high school 16th all time in scoring with 2,068 points. He was a 3 time all-state player and was named Mr. Basketball in 1999. In 1999 he was also named the Midwest Sports Channel male athlete of the year. The award was for a 5 state area and incorporated athletics as well as academics. (Denver carried a 4.0 GPA and was a state champion back to back years in triple jump and high jump).

After high school, Denver went on to play at North Dakota State University where both his brothers attended college. NDSU was a solid team early in his career but had the most success in 2003 when they won 20 games and narrowly missed the Div II national tournament. Denver left NDSU as the all-time leader in scoring (1,813) and 3 point field goals (255). He was named All-NCC 3 times as well as being an All-American in his senior season. During his 4 years he was able to play for 3 talented coaches and was able to learn from each one. Ray Giacoletti is currently the coach at Drake, Greg McDermott is coaching at Creighton, and Tim Miles is the head coach at Nebraska.

After college, Denver spent time playing in the CBA as well as overseas in Australia and Finland before calling it quits in 2006. Currently Denver lives in Woodbury, MN with his wife Patty DeClercq TenBroek and daughter Ava. Patty is an exercise physiologist and Denver works in medical sales for Stryker.