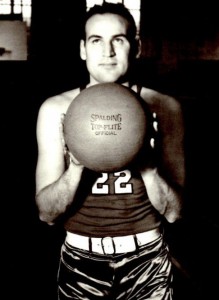 Celebrating state championships became nearly an annual occurrence for Yankton during the four years Ray Hamann starred for the Bucks.

With the 6-foot-5 center controlling the middle, Yankton dominated that era of one-class basketball. The Bucks of Coach W.W. Stephenson advanced to the title game of the state tournament during each of Hamann’s four seasons. Yankton won three championships during that time.

The Bucks of 1931, during Hamann’s senior season, raced to a 31-0 record and are considered one of the state’s all-time greatest teams. Hamann also excelled in football and track.

Hamann left Yankton to become a three-year basketball performer for the University of Wisconsin. As a senior in 1935 he helped the Badgers of Coach Harold Foster go 15-5. Wisconsin shared the Big Ten Conference title with Purdue and Illinois as each of the tri-champions went 9-3 in the league.

Hamann enjoyed a lengthy career in education in Wisconsin as a teacher and administrator. He was an accomplished coach at Kimberly and Appleton high schools and at Lawrence University. Hamann was inducted into the South Dakota Sports Hall of Fame.

He died May 7, 2005, in Yankton at age 93. Hamann was preceded in death by Eloise, his wife of 44 years, and Leora, wife of six years. He was survived by sons Howard, David and Richard.