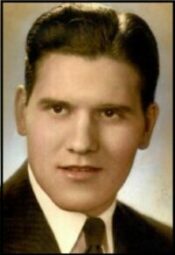 Throughout the storied history of high school basketball in South Dakota there have been many, many exceptional coaches. The influence those coaches impart on young athletes often can be life-changing. Lessons learned about qualities such as character, integrity and sportsmanship can endure long after playing careers have ended.

A story examining the importance of coaches is featured in the 2022 Fall Newsletter by the South Dakota High School Basketball Hall of Fame which was mailed Oct. 27. Profiled is the late George Houk (right), who compiled an unprecedented record while stressing positive values which helped his players on their journeys toward adulthood.

The 17th edition of the newsletter also includes several other interesting stories. One is about a town whose pride in the accomplishments of its two high school teams was recognized across the state. Another remembers a championship won by a team with uncommon physical prowess. Also in the newsletter is a story about a game in which four players combined to keep the scoreboard numbers constantly changing.

Two free newsletters are published yearly by the Hall of Fame, in the spring and in the fall. To be included on the mailing list simply click on Viewpoint at the top of this website and provide us with your name and your address.