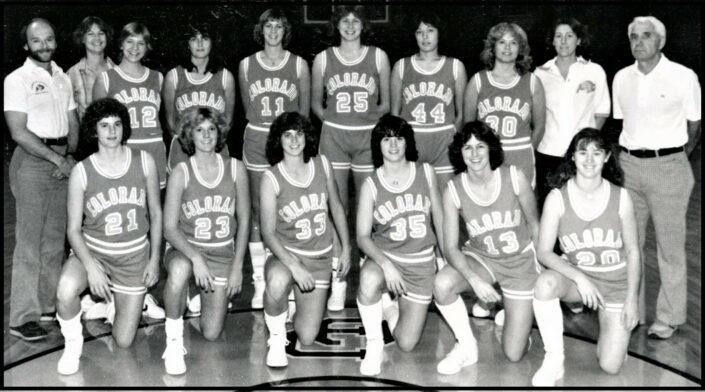 Girls basketball tipped off in South Dakota in 1975 and within the first dozen years several elite prospects emerged. Their high profile helped make the state a common destination for NCAA Division I coaches searching for talent.

The makeup of the Buffaloes in 1982, shown in the CU photo above, had a distinct South Dakota influence because of the head coach and three important players. Colorado posted a 28-8 record that season under Sox Walseth, standing at right. The late Walseth, who was a Pierre native, relied heavily upon Van Goor (25), Hiemstra (12) and Holwerda (23). Walseth, Hiemstra, Van Goor and Holwerda are all members of the South Dakota High School Basketball Hall of Fame.

Brookings had a team which was so gifted in 1985 that it sent three of its players on to excel at Division I programs. The Bobcats climbed as high as No. 3 in the nation in the USA TODAY girls basketball rankings that season. Amy Mickelson went on to become a standout at the University of Washington, Renae Sallquist at Vanderbilt University and Paula Kenefick at Yale University. Mickelson and Sallquist have been inducted into the SDBBHOF as has Anderson.

Steph Schueler capped her Sioux Falls Lincoln career in 1986. Her next stop was Iowa where she had an impressive career with the Hawkeyes. After the standouts from the first dozen years showed the way, a number of other South Dakota girls have gone on to the bright lights of Division I basketball. Included are many who have played at South Dakota State University and the University of South Dakota since their transition from Division II to Division I.