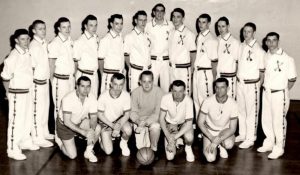 Because of their outstanding achievements the Watertown Arrows of 1959 were honored by the South Dakota High School Basketball Hall of Fame as its Team of Excellence for 2019. The Class A champion Arrows were recognized at the Hall of Fame’s 10th annual banquet at the Ramkota Hotel in Sioux Falls.