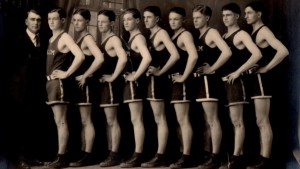 Among the highlights of the South Dakota High School Basketball Hall of Fame’s annual banquet is the recognition of one of the state’s greatest teams of the past as a Team of Excellence. Two such teams were recognized in 2016.

One was the Salem Cubs of 1926. Salem had an astounding 40-1 record. The Cubs won the single-class state title and then took third place in the prestigious National Interscholastic Tournament that was held at the end of the season in Chicago.