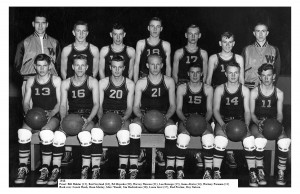 It was a shot heard around South Dakota, and it began what would become the greatest dynasty in the history of Class B boys basketball.

The shot was a halfcourt rainbow at the buzzer by LeRoy “Lefty” Engebritson of Webster that propelled the Bearcats to a 45-44 win over unbeaten Platte in the first round of the 1946 “Big B.”  Coach George Hauk’s squad went on to defeat Thomas 45-36 in semifinal play and rolled past Hurley in the title game 47-27 to finish with a 27-2 record.

Hauk had guided Webster to a runner-up finish in the state tournament in 1945, and the 1946 title kicked off a string of three straight for the Bearcats, the only team to ever achieve the feat since basketball was divided into two classes in 1936.  Yankton did win four straight (1922-1925) when there was a one-class system.

The Bearcats defeated Eureka in the title game in both 1947 and 1948, and those three Webster championship teams are being honored as a Team of Excellence this year by the South Dakota High School Basketball Hall of Fame.