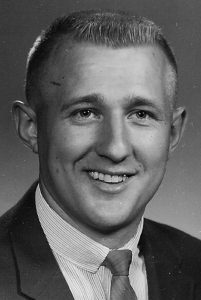 After his career at Lake Norden ended Jacobsen starred at South Dakota State University. He was chosen to the all-North Central Conference team three times and led the league in scoring when he averaged 23.6 points per game in 1961.

Jacobsen totaled 1,488 points during his time as a Jackrabbit. He led SDSU to three NCC championships and a third-place finish in the 1961 NCAA College Division National Tournament. He was selected by Syracuse in the NBA Draft.