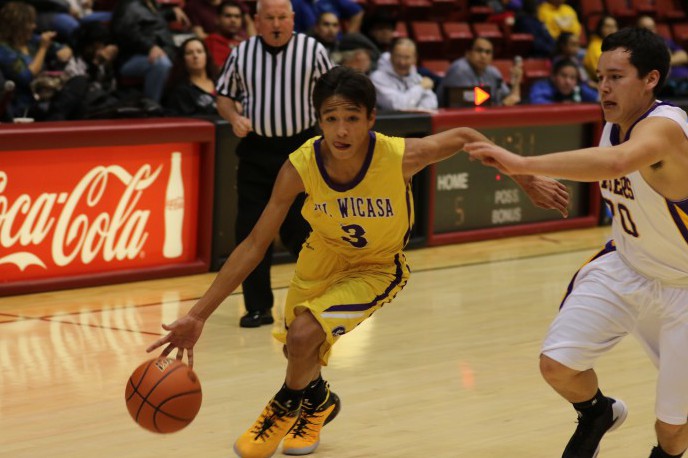 The hundreds of people whose names are currently on the South Dakota High School Basketball Hall of Fame mailing list have been sent our 2016 Spring Newsletter. It was mailed to them on June 2.

Among topics explored in the newsletter: *A special tournament, the Lakota Nation Invitational, that has come to stand for much more than just basketball. *Region II champion Ipswich’s surprising run to the Class B state title in 1952. *And a Q&A with Megan Mahoney, who has carried the banner of South Dakota through a decorated career as a prep, collegiate and professional star. In the LNI photo above Chris Comes Flying of Lower Brule drives against Justice Morrison of White River in the 39th annual tournament last December (Photo by Roman Hawran Lacho).

South Dakota basketball enthusiasts from 33 different states receive the free newsletter. They live from California to Massachusetts and from North Dakota to Texas. Our newsletters also can be downloaded on this website.

If you are not on our mailing list and would like to be added, email your name and home address to Executive Director Dave Wagner at dlwagner@tnics.com or you can contact him by phone by calling (605) 467-3010.