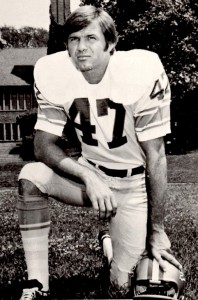 Wayne Rasmussen in the NFL

The South Dakota High School Basketball Hall of Fame will induct 19 new members during its seventh annual banquet at 1 p.m. on April 2 at the Ramkota Hotel in Sioux Falls. That will increase membership in the Hall of Fame to 117 of the most accomplished boys and girls players in the history of the state.

Included among the former greats in the Class of 2016 is Wayne Rasmussen, an all-state player at Howard High School. Later as a collegian at South Dakota State University he was named the Most Valuable Player in the 1963 NCAA College Division National Basketball Tournament held in Evansville, Ind.

Rasmussen, now of Brandon, graduated from Howard in 1960. He led South Dakota State to the national championship during his junior season. Also a football standout in high school and college, Rasmussen went on to a 10-year career in the National Football League as a defensive back for the Detroit Lions.

To be recognized at the banquet as Teams of Excellence will be two of the state’s all-time greatest teams: the 1958 Huron Tigers and the 1926 Salem Cubs. Ticket information for the banquet will be announced soon on this website.